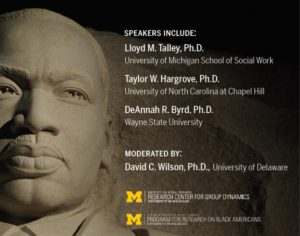 PRBA took the lead for the Research Center for Group Dynamics in organizing the ISR commemoration of Dr. Martin Luther King’s birthday with a panel entitled, MLK’s Legacy for Social and Behavioral Science Research. This theme was quite fitting because in September 1967, Dr. Martin Luther King Jr., addressed APA’s Annual Convention in Washington, D.C. and the title of his address was, “The Role of the Behavioral Scientist in the Civil Rights Movement”. A year earlier, he noted at the convention of the Medical Committee for Human Rights that, “Of all the forms of inequality, injustice in health care is the most shocking and inhumane.”

Three young scholars who participated on a panel shared their research, but also how Dr. King influenced their work. The panel was moderated by Dr. David C. Wilson, Senior Associate Dean for the Social Sciences at the University of Delaware. Dr. Taylor W. Hargrove, assistant professor of sociology at the University of North Carolina at Chapel Hill, presented, “Multidimensional Inequalities: Examining the Health Consequences of Race, Skin Color, and Context”. Dr. DeAnnah R. Byrd, a Postdoctoral Scholar in the Institute of Gerontology at Wayne State University, discussed her paper entitled, “Making A Dream A Reality: My Path to Understanding Cognitive Health in Blacks”. Finally, Dr. Lloyd M. Talley, Postdoctoral Fellow, in the School of Social Work at the University of Michigan, presented, “Unpacking Risk and Resilience among Urban Black Emerging Adult Men: A Quantitative Intersectional Analysis”. 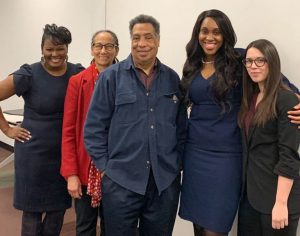 In conjunction with this event and with the support of the School of Social Work, Dr. Robert Taylor, Director of PRBA and Professor of Social Work, invited three young scholars (Bernadine Waller, doctoral student Adelphi University, Dr. Ijeoma Opara, Assistant Professor at Stony Brook, and Patricia Louie, doctoral Student at the University of Toronto) for a Mentoring Weekend. These scholars were all former PRBA summer program attendees. They attended the ISR MLK Day commemoration, went to dinner with the speakers and invited guests afterwards, met individually with the Dean of the School of Social Work, met with faculty across campus and gave brief presentations at a PRBA mentoring group meeting.